In California we are blessed with many unique beaches but I doubt there are many that are sought after because they used to be town dumps.  Glass Beach in Fort Bragg is popular for exactly that reason.  It was a local dumping ground in the 50’s but by the late 60’s people had come to their senses and most of the trash was cleaned up.  The one thing they couldn’t easily remove was all of the broken glass; millions of bits of broken glass in a multitude of colors, forever mixed with the sandy shore.  Over time Mother Nature has reclaimed her beach; wearing away the sharp edges of the glass to transform one generation’s trash into another generation’s treasure. 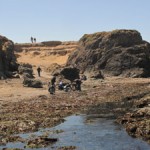 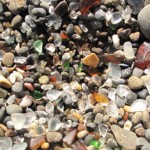 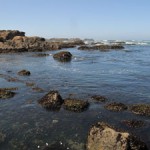 A visit to Glass Beach is a fun beachcombing experience. Almost anyone in Fort Bragg can point you in the right direction.  The beach doesn’t have an official sign; you just follow the trail at the end of West Elm Street.  At first glance it doesn’t look very different from any other beach but as you get closer the pebbles become translucent and flecks of color emerge.

We spent a morning hunched over surveying the bits and pieces of smooth ocean worn glass. Occasionally we came across one that tried to tell us what it used to be: an old brown Michelob bottle or maybe a green medicine bottle.  Officially, collecting isn’t allowed, but it seemed to be what most of the people were doing when we were there; some had containers, others just pocketed pieces here and there. Much of the brightly colored glass has been picked away over the years but the beach is still covered with endless nuggets of irregular shaped brown and clear glass.  I can only imagine what it looked like when there were more red, blue and green “gems” glistening in the sun.  It is understandable that they want to preserve the beach it but it is also ironic that they try to prevent people from collecting what is only there because it was thrown away decades ago.

The best time to visit Glass Beach is at low tide, when more colored glass is revealed and the tide pools emerge to provide another form of entertainment.  Every once in a while you will catch a glimpse of something else, maybe a hubcap or a sparkplug, that is almost unrecognizable after being incorporated into the shoreline; nature’s triumph over the trash.