Yesterday was the 56th year that the Enmanji Temple in Sebastopol has done their annual teriyaki BBQ.   That is a lot of years of barbequed chicken!  It was our first year attending and as former Japan expats we were happy to find a local connection to the summer festivities we enjoyed during our time in Tokyo.  Summers in Japan are filled with festivals, food, fireworks, and fun; a real celebration of the season.  The Enmanji BBQ brought back some great memories while opening our eyes to the vibrant local Japanese-American culture right in our own backyard. 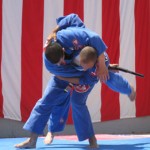 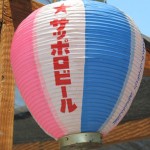 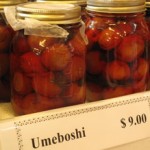 Enmanji, meaning garden (en-園) fulfillment (man-満) temple (ji-時), dates back to 1928 and was the first temple in North America given the “ji” or temple designation by the mother temple in Kyoto, Japan.  The main hall was originally built by the Manchurian Railroad Company for the 1933 International Exposition in Chicago. It was purchased by the Buddhist Mission of America and transferred to Enmanji in 1934.  When you drive up the Gravenstein Highway it is easy to miss the silver tile roofed temple set back from the road but there was no mistaking the location yesterday.  Police were out directing traffic as a stream of cars filed into the dirt parking lot across the street.  So much for needing a map!

After 56 years the Enmanji BBQ runs like a well oiled machine.  The barbeque line wrapped around the temple building but moved along steadily as they turned out generous plates filled with a whole half of a BBQ chicken, rice, and potato salad (for only $10).  And the food didn’t stop there.  They had booths offering baked goods, beer and sake, kushiyaki (grilled meat and veggies on a stick), teriyaki burgers, imagawayaki (pastries filled with sweet been paste), and more.  The keiki (kids) were kept busy tossing bean bags for prizes, making masks, or trying their hand at golf putting.  There was a small nursery’s worth of plants for sale, from azaleas to maple trees, as well as a variety of handmade goods including home-canned umeboshi (picked plums). 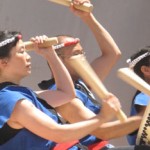 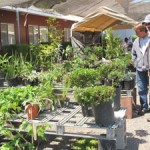 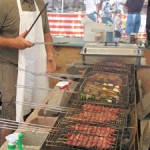 The event must have attracted at least 500 people, maybe more, but it never felt too crowded and there was always somewhere to sit.  It was lively but intimate; you could feel a cultural communion amongst the diverse group of attendees.  At the center of the event was a large stage where demonstrations of karate, judo, and taiko drumming provided ongoing entertainment.  We made a point to stick around for the Sonoma County Taiko performance. There is nothing like the reverberating sound of rhythmical taiko drums to make me feel the spirit of a Japanese festival.  Ahh, natsukashii – the feeling of nostalgia!

To experience more local Japanese-American culture you can visit Enmanji next Saturday night at 7:00pm for the Obon dance with more food and taiko drumming.  The Sonoma County Japanese American Citizen’s League and Sonoma County Taiko also offer programs and activities, including the Kids Taiko & Japanese Culture Camp that starts on July 19th.  Some very good opportunities to get out and broaden your cultural horizons! 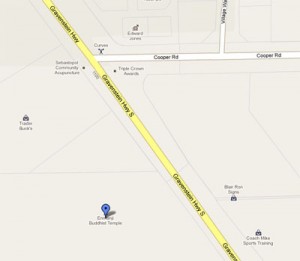